20th anniversary of recognition of the Cornish language

(20th anniversary of recognition of the Cornish language)

Children from Trewirgie Infants and Nursery School in Redruth will be gathering and singing in Kernewek (Cornish) at Kresen Kernow on 4 November, joined by pupils from 8 other primary schools on the ‘Go Cornish’ programme. This celebration marks the eve of the 20th anniversary of the Cornish language being officially recognised by the UK Government under the European Charter for Regional or Minority Languages.

Thousands of languages around the world are at risk of disappearing, however some are in resurgence and Cornish is recognised internationally for its successful ground-up revival.

Currently 23 schools, with over 4,000 pupils, are having fun with the Cornish language through the free Go Cornish for Primary Schools programme, commissioned by Cornwall Council.

Will Coleman at Golden Tree Productions, masterminds of the Go Cornish programme, said: “We are delighted that so many Primary Schools have signed up for the ‘Go Cornish’ programme. The award scheme is only in its second year and almost 5000 pupils have been involved already. More and more schools are getting on board, having fun with the Cornish language.”

There are now Cornish language books, films and an album sung almost entirely in Kernewek (Tresor by Gwenno) has been nominated for this year’s Mercury [Music] Prize. Many businesses are using Cornish words in their marketing and branding, such as St Austell Brewery’s Korev - the Cornish word for ‘beer’ - and more than 3,000 bilingual street signs are now in place across the Duchy. 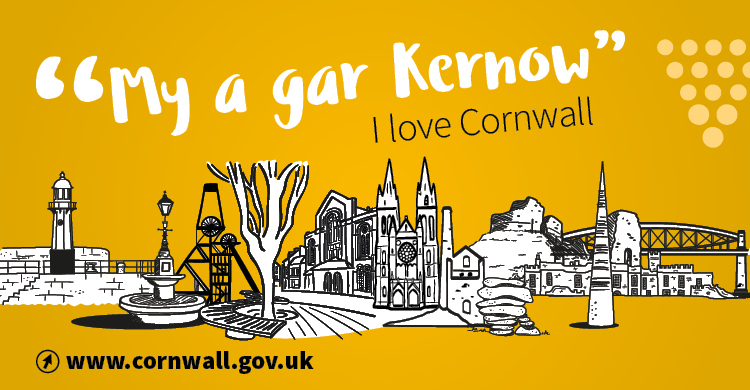 Cornwall Council Leader Linda Taylor said: “We are committed to encouraging the use of the Cornish language as a unique cultural asset which underpins the distinctiveness of Cornwall and has an important part to play in our cultural, economic and social life.

“More and more people, including children in our schools, are learning Cornish. Musicians such as the Mercury Prize Nominated artist Gwenno are composing and singing in Cornish, and local hero and filmmaker Ed Rowe has just released a short film in Cornish. It was also a proud moment when the Proclamation of the accession of King Charles III was read first by the High Sheriff of Cornwall and then in Cornish by the Grand Bard of the Cornish Gorsedh.”

It’s not just children who are embracing Kernewek as more and more adults are also learning the language through classes. New technology is making it easier for people to learn online, with more than 2 million searches of the online Cornish dictionary and over 1,500 people using the Memrise app to learn Cornish.

Over 20 years ago, people in Cornwall began to campaign to have the Cornish language officially recognised. The secretary of state at the time announced on 5 November 2002 that after careful consideration and with the help of the results of an independent academic study on the language commissioned by the Government, it had been decided to recognise Cornish as falling under Part II of the Council of Europe’s European Charter for Regional or Minority Languages.

This means that Cornish joined Welsh, Scottish Gaelic, Irish, Scots and Ulster Scots as protected and promoted languages under the Charter, which commits the Government to recognise and respect those languages.