Work to begin on walking and cycling routes in Truro 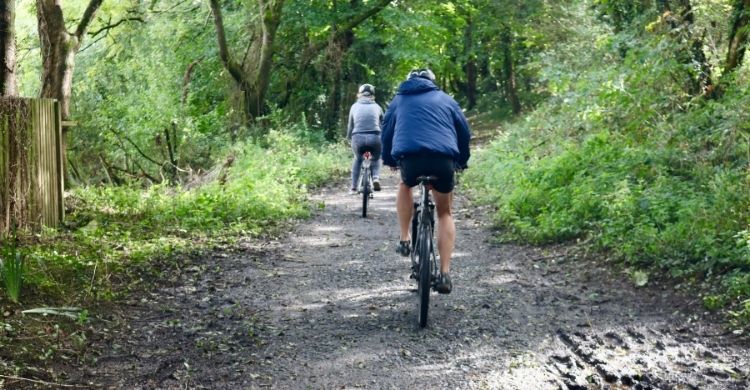 Work has started in Truro on improving walking and cycling routes connecting the city centre with employment and residential areas.

The work will include replacing the existing surface of the Newham Trail and improving the entire route, which runs along the historic railway line between Newham and New County Hall. New trees will also be planted, wildlife habitats created along the route, and new rest areas built for trail users to stop and enjoy the nature on offer.

Taking place in stages between now and December, the project will also improve crossing points and bike storage areas in Truro City Centre.

Although every effort will be made to continue access to the Newham Trail, sections of the route, particularly at Penwethers Lane where the existing bridge will be refurbished, will temporarily close during the improvement works.

Read more about the construction work for the Truro Loops project

The project is the first phase of the Truro Loops project – a long held ambition of the local community to reconnect the city to its river and marine heritage, showcase its beautiful environment. It is hoped the project will support and encourage more people to make journeys on foot or by bike, getting out into nature or exploring less-known areas of Truro.

Philip Desmonde, Cornwall Council cabinet portfolio holder for transport, said: “I know the old railway to Newham route of the proposed Loops Trails having used it on numerous occasions for access to work in Newham and simply for pleasure. It has a beautiful setting along the river but needs upgrade for safe and comfortable use as part of the overall connection with the city centre. The Truro Loops project will encourage more people to cycle and walk to work or for pleasure and leisure and so make changes that will have long lasting benefits – staying healthier for longer, improving air quality and combating climate change. Research shows that one in every three journeys made by car are of less than 5km and we want to positively support measures that give people more options for how they make those journeys. I enthusiastically welcome this investment for our community.”

The idea for Truro Loops was first developed by Truro River Working Group Community Interest Company (TRWG CIC), a community-based organisation working to re-connect the river with the city and making Truro's environment more accessible to people of all ages and abilities. Truro Loops is an exciting project that seeks to connect six trails in, across, and around Truro which can be accessed by bike or on foot, including a river loop and the Newham Trail. Many elements of the trails are already in place and some, like the Newham Trail, are already used by cyclists, walking families, runners and dog-walkers.

The wider vision for Truro Loops beyond this first phase includes a bridge at Lighterage Quay, connecting Boscawen Park and Newham as part of a river loop, which is being considered as part of the Town Deal Fund bid. Other aspects of Truro Loops are hoped to be included in the Truro Transport Strategy and the Green Transport ambitions for Truro under different funding streams in the future. The first phase of implementation covered by this consultation will be a first step to encourage sustainable travel and recreation in Truro, supporting people to live healthier, walk and cycle more, to explore the natural and city environment.

Sue Brown as longstanding volunteer at TRWG CIC, speaking on behalf of the Board and Steering Group, said: “We are thrilled that the first phase of our Truro Loops vision is now moving forward. This brings to fruition a community-led effort supported by Cornwall Council and is the first of many loops which we hope will transform the way we travel locally in our urban and riverside areas and appreciate the countryside that surrounds Truro. A lot of local people have worked incredibly hard to get to this stage and we are very grateful for everyone's support.”

The Truro Loops Newham and Truro City Centre walking and cycling improvements are being funded by the Council’s Local Transport Plan and the European Regional Development Fund.