Another set of historic human remains have been discovered during a beach clean on the Cornish coast.

Emily Stevenson, co-founder of Beach Guardian, came across the remains of a human skull on a dune cliff at Sennen Cove earlier this month.

Further investigation by Devon and Cornwall Police, with the assistance of Cornwall Council’s Strategic Historic Environment Team, determined that these were historic in nature, similar to those discovered last November at Newtrain Bay, Trevone, on the north coast. 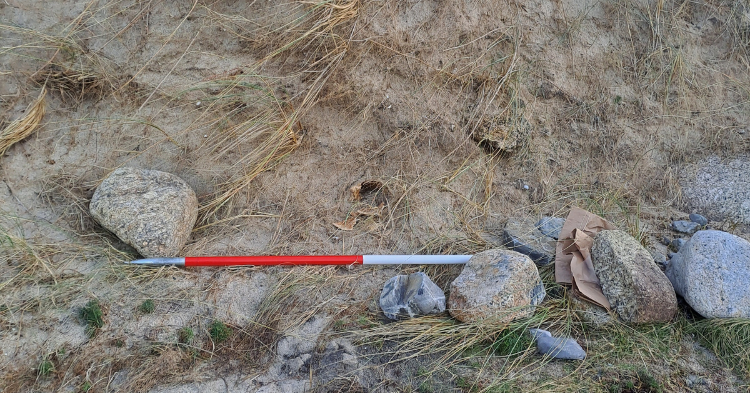 Ann Reynolds, Senior Officer for the Rural Historic Environment at Cornwall Council, said: “Historic burials tend to appear every couple of years or so, but to have two sets of remains appear over two months is more unusual. It serves as a reflection of the continually changing coastline and the potential for more archaeological remains to be revealed, particularly at this time of year.

“It is clear that they have been there for some time and it is possible that they may be another shipwreck victim, lost many centuries ago and buried by the local population. The remains are better preserved than those found in November, as they are encased in sand, and following excavation we hope to be able to carry out some analysis of the age of the bones and find out a little bit about the person such as their place of origin.”

Emily Stevenson said: “After spending over half my life beach cleaning in Cornwall, I thought I’d seen my fair share of interesting beach finds. Most know about the old crisp packets, the 'Lego Lost at Sea’ and the Mermaid’s Purses… but this find really is in a league of its own. There have been times before, when I’m exploring hidden coves or deep, dark caves filled with plastic, that I have worried about finding human remains, but it really wasn’t expected on a popular beach like this.

“The beach clean we hosted that day was just like any other, and off I went as usual to scour the sand dunes for plastic. The dunes are a great place to discover vintage litter, as the sand can perfectly preserve it for decades - only now do I really know that it isn’t plastic that is preserved here!

“Whilst this will be a fantastic story for us to use to inspire more people to start beach cleaning and learning the history of our coastline, it is a stark reminder of the fragility of our coast against the battering storms that are only going to increase in frequency and severity due to climate change.

“The degradation of the dunes not only releases plastics, but also carbon that has been stored here - and of course, anything else that has been retained here! Of course the other tragedy is the story of whoever's remains these are, but we hope that this discovery can finally bring their story to a peaceful and positive end by inspiring the next generation to care for our coastline. We are so grateful to the police and Strategic Historic Environment team for their fast and helpful response to this."

Councillor Martyn Alvey, Portfolio Holder for Environment and Climate Change at Cornwall Council, said: “This is another really interesting find from the Cornish coast. I look forward to seeing if the excavation and further tests can help us find out more about this individual and how they came about their final resting place.”

When any human remains are discovered, they should not be touched or moved and should be reported immediately to the police.

Any other historical features revealed along the coastline after storms, including wrecks, should be reported to the Cornwall and Isles of Scilly Historic Environment Record. The team  will make a note of the discoveries and advise on recording and management of the remains.