Kresen Kernow brings together academics and enthusiasts for symposium 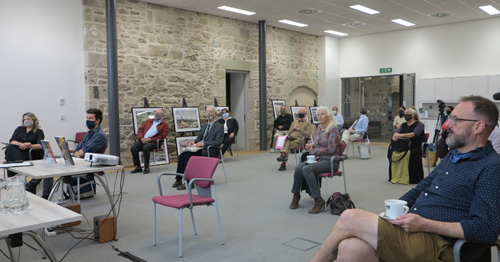 A group of academics, enthusiasts and theatre technicians have come together to discuss four historic Cornish medieval playscripts which have been united under one roof for the first time in history.

Kresen Kernow hosted the symposium as part of its ‘Mes a’n Kemmyn/Out of the Ordinary’ exhibition which brings together The Cornish Ordinalia and The Creation of the World (on loan from the Bodleian Libraries at the University of Oxford) with The Life of St Meriadoc, and The Life of St Kea (on loan from the National Library of Wales in Aberystwyth). 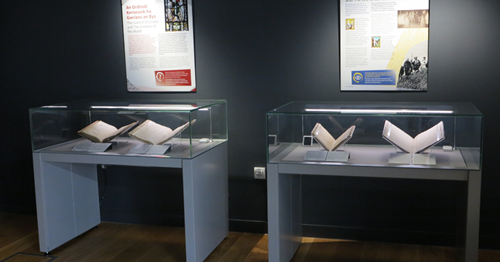 On display until Saturday, September 25, the manuscripts featured in the exhibition give a glimpse into early Cornish language and medieval outdoor theatre tradition. Written in Cornish, the manuscripts feature well-known Bible stories - including Noah’s flood and the Passion of Christ - as well as more obscure and forgotten tales, such as the life of St Meriadoc, Camborne’s patron saint. The Cornish Ordinalia, which dates from the 1400s, contains possibly Britain’s earliest full play scripts, pre-dating Shakespeare by 200 years. It also contains what may be the world’s earliest stage diagrams and is the oldest complete text in the Cornish language.

As part of the symposium, Professor Michelle Brown (Professor Emerita at the University of London), Dr Oliver Padel (University of Cambridge) and Dr Ken George (Cornish Bard, author and poet) gave presentations on the history of the manuscripts, and there was a special filmed appearance from Dr Maredudd Ap Huw at the National Library of Wales. An afternoon discussion featuring Jason Squibb (St Just Ordinalia), Simon Harvey (o-region, Kneehigh), Sue Hill (Wildworks), Jack Morrison (Feast), Guy Watson (Cousin Jack's) and Bethany Lyne (Cornwall365) discussed how the plays may have been staged in the past, and the challenges and thrills of staging them today.

Jason Squibb, creative director of the St Just Ordinalia production, said: “What a fantastic opportunity to hear from so many people who are passionate about the Ordinalia and Cornish medieval plays, and the impact that these little manuscripts have had so many centuries later. St Just is well and truly ready to welcome audiences to the oldest working theatre in Britain, the Plen-an-Gwari - and to put manuscript theory into theatrical practice with our performances this September.”

Chloe Phillips, Learning Lead for the Archives and Cornish Studies Service, said: “Our activity programme around the exhibition has hopefully included something for everyone, including free online talks to family fun activities, Cornish classes and creative workshops. It was a privilege to organise and host the symposium, and to witness such a wealth of expertise being shared.”

Stephen Rushworth, Cornwall Council cabinet portfolio holder for economy, said; “The Kresen Kernow team have put together an engaging and creative programme to bring these manuscripts to new audiences. I hope anyone with an interest in early Cornish history and culture will take the opportunity to visit the exhibition before it closes towards the end of this month.”

To celebrate the arrival of The Ordinalia, a small but mighty team of community volunteers have gathered to re-enact the Ordinalia Trilogy in arguably the oldest outdoor theatre space in Britain (the Plen an Gwari or ‘Playing Place’ in St Just). The productions of the 14th century mystery plays form part of a two-week festival of Cornish culture currently underway until September 18 (including workshops such as Cornish dancing, Cornish wrestling, dance and town trail tours).

Tickets to all three plays in the trilogy are on sale now on the Hall for Cornwall website. Tickets start from £16 (£14 for local residents) and for the entire two-week festival, are priced from £90.