Iconic lock gates damaged in winter storms are back in action

Bude Sea Lock which suffered serious damage during winter storms is back in use following major repairs.

The lock, which allows vessels to enter the sea from the canal and vice versa, is one of only two working manually operated sea locks in the UK. Built in 1823 and reconstructed in 1835, it is an iconic feature in the town.

In April 2019 whilst readying the lock for the season, it became apparent that sometime during the winter of 2018 the outer north gate had sustained substantial damage rendering the lock unusable.

A lengthy project to remove the gates and repair them unfolded. 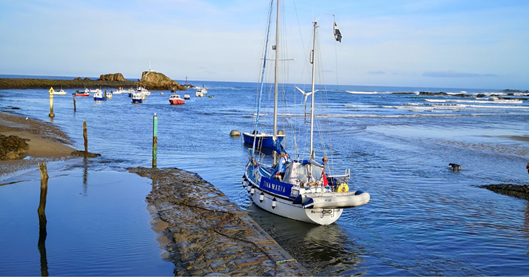 The first stage involved load testing the road leading into the harbour to allow for the heavy crane that would be needed to lift out the 15-ton gates. After securing the necessary funding, sourcing contractors and overcoming challenges presented by the pandemic, the gates were lifted out in June 2020.

It then became apparent that the lower 20-year-old gate gudgeon castings had failed on both gates and further investigation found that the cast pintles, believed to be substantially older and fitted in the bottom of the lock chamber, were worn beyond their working life.

In February 2021, the pintles, which is the cast plate with an upstanding pin that the gudgeon sits on, were removed from the lock chamber and new ones were cast. Whilst this was being done, the wooden gates underwent essential repairs.

Finally, in August 2021, the gates were finished, and the new castings fitted to them and the lock chamber. 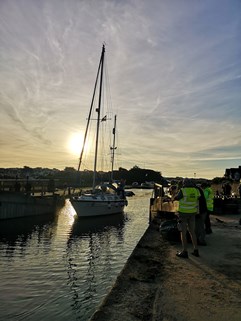 Last month the gates were commissioned allowing the first yacht in almost three years to lock out on September 21. The moment was captured by Paul Vincent, Bude Harbour Master, in the pictures above and below.

Mr Vincent said: “It’s fantastic to see the gates back in action after undergoing these essential repairs. There are always challenges when it comes to restoring such specialist equipment but it’s great to see it all come together and that we can now use the lock gates once again.”

Cornwall Councillor Loic Rich, who is chair of Cornwall’s Harbour Board, added: “I’m really pleased to see these gates have been restored and are back in service. They are an iconic feature in Bude and I’m sure many people will enjoy seeing them working and vessels passing through.”