A Cornwall Council project looking at the potential of seagrass in helping to tackle climate change has revealed one of the biggest seagrass meadows ever found in UK waters.

The council commissioned the University of Exeter and environmental researchers Ecospan to carry out surveys off the coast near Penzance and Falmouth to assess how effective seagrass is at growing and storing ‘blue carbon’.

The term is used to describe the carbon captured by the world’s oceans and coastal habitats and is seen as a vital tool in stabilising climate change.

Using cutting-edge surveying techniques scientists from Ecospan discovered a new seagrass bed in Mounts Bay covering the equivalent of nearly 300 rugby pitches and spanning 5km, all hidden beneath the water.

The bed is larger than all known seagrass beds in Cornwall combined and equates to 3.4 per cent of known seagrass areas nationally, representing one of the largest beds ever found in the country.

In the Fal and Helford Estuaries University of Exeter researchers were able to measure the full scale of the 172-hectare seagrass beds for the first time, enhancing their knowledge of these biodiverse and productive beds.

The findings have reignited interest across Cornwall for the potential discovery of new seagrass beds using echo-sound technology and how they can contribute to work to tackle the climate and ecological emergencies.

It comes as the council was awarded nearly £100,000 from the Natural Environment Investment Readiness Fund (NEIRF) announced by Defra and the Environment Agency to set up a Blue Natural Capital project.

The programme will look at how different marine habitats in Mount’s Bay and the Fal and Helford Bay and Estuaries help to provide a range of nature-based solutions such as coastal protection and absorbing carbon. 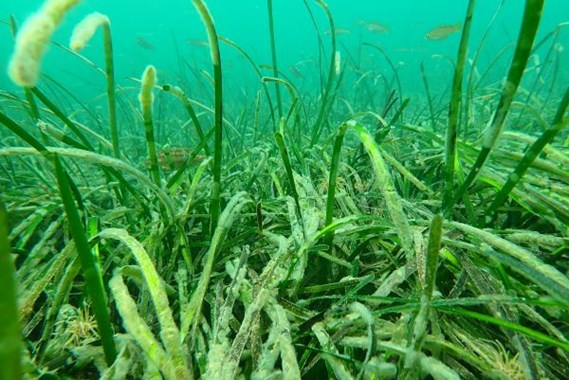 Councillor Martyn Alvey, Cornwall’s cabinet member for environment and climate change, said: “The ability of seagrass to draw down significant amounts of carbon has provided further evidence that natural climate solutions right here in Cornwall are vital to combating the climate emergency.

“While we knew there was some seagrass in Mount’s Bay, no one could have predicted the scale of these findings using new survey techniques.

“We now need to work with partners to ensure that these vital blue carbon ecosystems are protected from threats such as poor water quality, recreational boating and nutrient loading. This will ensure these vital carbon sinks and homes for wildlife provided by seagrass can be protected now and into the future, and significantly aid our response to the climate and ecological emergencies.”

Seagrass is a flowering plant that only grows in seawater and thrives as brilliant underwater meadows of green grass.

Seagrass meadows are a natural solution to a range of issues: they clean coastal waters and help to keep oceans healthy and climate stable.

They also provide a home and nursery for hundreds of species, including commercial fish which is vital to Cornwall’s economy.

Seagrass is critically important for the long-term capture and storage of coastal blue carbon, and globally seagrass stores up to an estimated fifth of all ocean carbon.

The University of Exeter surveyed the seagrass beds in collaboration with the Cornwall Inshore Fisheries Conservation Authority (CIFCA), providing the most complete mapping of seagrass habitats to date.

Their studies also highlighted the main risks to these beds linked to water quality, boating activities and climate change.

Dr Chris Laing, Senior Lecturer in Marine Biology at the University of Exeter, said: "We are incredibly lucky to have such extents of seagrass and other important marine habitats in Cornwall, and our work with the council is bringing together stakeholders, water users and local communities to protect and preserve them for the future."

The council and harbour authorities in the Fal and Helford are already working to reduce pressures on seagrass beds. Harbour masters and moorings officers can advise boat owners where best to anchor to cause the least impact and all rubbish should be taken home. Areas with the most seagrass in Cornwall are Mounts Bay, Fowey, Looe, Falmouth, St Mawes and the Helford.

The NEIRF funding will support the council to look at the carbon sequestration potential from Cornwall’s other blue carbon ecosystems which include seagrass, mud flats, salt marsh, maerl (ancient coralline seaweed beds) and kelp.

It will also value coastal ecosystem services, such as coastal protection and water quality for investment into the Cornish marine environment and to demonstrate the financial benefits of investing in nature.

The council and University of Exeter are also supporting the Kernow Sat 1 satellite which is monitoring the health of Cornwall's coast, areas of sea pollution and the best place to plant a kelp forest for carbon sequestration.