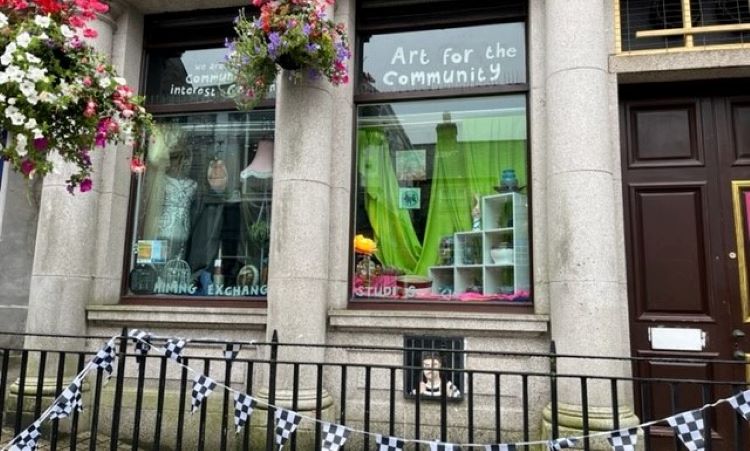 Artists and businesses have taken over the former HSBC bank on the high street, and other businesses have moved to vacant premises in the town centre, as Redruth prepares for the multimillion-pound redevelopment of the historic Buttermarket site.

The former HSBC bank in Redruth, closed since May 2017, has reopened its doors as an extraordinary creative workspace.  The former bank has been transformed by a collection of artists and former tenants of the Grade II listed group of buildings that include the Mining Exchange, Wheal Peevor Purser’s Office and the Auction House –collectively called ‘The Buttermarket’.

At the end of March this year a grant was awarded by Cornwall Council through Historic England’s High Street Heritage Action Zone (HSHAZ) scheme to Redruth Revival Community Interest Company (CIC) to purchase the redundant historic bank in the town centre.

The Bank, as it is now called, has become home to several Buttermarket tenants ahead of building work starting at the Buttermarket towards the end of this year.

The former banking hall and offices on the ground floor have been transformed into a brightly coloured gallery and workspaces by former tenants of the Mining Exchange building.  Upstairs four other artists have taken over: Siobhan Purdy, Cosmic and Linda Stubbs, along with Liam Jolly who has run the Auction House gallery at the Buttermarket since 2017. All had units off the Buttermarket courtyard.

Another former tenant, Kevin Downing of Lucky’s Record Bar, has already relocated from his tiny unit off the Buttermarket courtyard and is now based on Fore Street, opposite the Town Clock.  When in the Buttermarket, his store was dubbed the smallest record shop in England by Graham Jones, author of books about record shops that includes Last Shop Standing, The Vinyl Revival and The Shops That Made It Happen.

Kevin Downing, said: “Redruth Revival gave me the opportunity to set up and try opening a record shop in Redruth.  Support from people who visited has now meant I am able to open a shop right in the centre of town.  Without starting in the Buttermarket I wouldn’t have been able to do this.”

The Beats & Roots café will be relocating from the Buttermarket courtyard in October, moving to their new home in ‘The Ladder’ at the former Redruth Library on Clinton Road.  The former Garde II listed library building had been closed for several years with the opening of the new library on Alma Place. A few months ago, Cornwall Council agreed to lease the property to a new community organisation, the Former Redruth Library CIC, who announced the relaunch of the library under the new name of The Ladder.  Refurbishment works to the building are being carried out with financial support from the Redruth HSHAZ scheme and Cornwall Council.  The Ladder is expecting to open its doors to the community later this year.

Another project that has commenced this week following grant funding from the Redruth HSHAZ scheme, is the demolition of the K9 Crusaders shopfront at No.33 Fore Street and its transformation into a more traditional granite frontage sympathetic to the Grade II Listing of the building.  The popular charity shop K9 Crusaders is moving into the vacant building opposite that used to be Peacocks.

Judy Davidson, MBE and Chair of Redruth Revival said: “The purchase of the bank site in such a central and prominent position in the town has been a great step in the Redruth Revival CIC narrative.  Our tenants have moved in and brought life and colour to Fore Street.  Great result for Redruth!”.

Councillor Louis Gardner, Cornwall Council Cabinet Member for Economy said: “The transformation of The Bank is astonishing – I don’t think anyone who used the HSBC bank in Redruth would recognise what’s behind that austere façade now!  It’s fantastic to see the success of the fundraising achieved by Redruth Revival for the refurbishment of the Buttermarket.  It’s also really important to Cornwall Council and the HSHAZ scheme that we have been delivering in Redruth, that every assistance is given to the tenants who have to leave the Buttermarket before contractors start on site later this year.  Businesses have found alternative accommodation in the town centre and are contributing to Redruth’s growing reputation for independent and creative shops and businesses taking over premises vacated by the big chains.  It is transformations such as we have seen in The Bank that is a vision of the possible future of our high streets.”