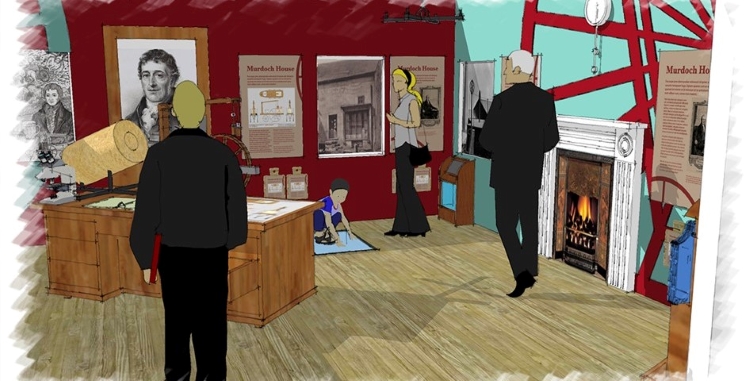 Redruth 2000, the charity which runs Murdoch House, has been awarded £34,000 in grant funding from Historic England’s Redruth High Street Heritage Action Zone (HSHAZ), Cornwall Council and Redruth Town Council to start the redevelopment and refurbishment of Murdoch House in Redruth.

The Grade II listed historic building was once home to the prolific Scottish inventor and adopted son of Redruth, William Murdoch (1754-1839). Whilst living in the town Murdoch worked on some of his most famous inventions, including the Murdoch Flyer, the first working model of a steam locomotive, which paved the way for Richard Trevithick’s high pressure steam engine and eventually Stephenson’s Rocket.

Perhaps Murdoch’s key invention is the application of gas lighting, derived from heating coal. Murdoch House was the first domestic house in the world to be lit by gas.

Every June Redruth celebrates Murdoch Day and this will project will create a permanent celebration of his life and inventions.

Redruth 2000 have a long-held ambition to retell the story of William Murdoch, to celebrate his achievements and introduce his accomplishments to a wider audience. This funding will allow them to carry out some much-needed refurbishments and to install historic interpretation of the life of Murdoch within the house where he once lived.

Once finished, Murdoch House will increase its opening hours and be available to schools and other groups, adding to its existing community use and the support it already receives from organisations such as the town’s Women’s Guild, Red Tent and Cornish language classes.

The project will start in January 2023, with the opening to the public expected in March 2023.

Colin Saxton, Vice Chair of Redruth 2000 said: “It is well over a decade ago that I accidentally discovered Murdoch House and William Murdoch. I was puzzled that such an important story was one of the best kept secrets in Cornwall. I determined to correct that during my time as chair of Redruth 2000, with some limited success. I am delighted by recent progress; through the eﬀorts of our current chair, Deborah Reeve, and intensive research by Manny Hernandez, plus the hard work and enthusiasm from all of the Redruth 2000 Trustees, the incredible story of William Murdoch may at last be told.”

Ross Williams of the Percy & Lily Reed Williams Charitable Trust said: “The charity’s trustees are very pleased that funding has been secured to enable some significant refurbishment and improvement works to Murdoch House. We purchased it nearly 30 years ago to save it as a public resource for the town and we are very grateful both to Redruth 2000 for their stewardship of it since then and to the funders who are supporting this work.”

Cllr Matthew Brown, Redruth Town Mayor said: “I am delighted that Redruth’s most historic building is set to benefit from HSHAZ funding and look forward to seeing the historic interpretation installation in place next year.”

Cllr Barbara Ellenbroek, Chair Redruth HSHAZ said: “Murdoch House is an important, but little known, part of the history of Redruth. The inventions of people like William Murdoch really did change the world, and it is good to be reminded of how significant they were. I hope that the work being done here will inspire another inventor or two of the calibre of Murdoch as we look forward to the 21st century and beyond.”

John Ette, Partnerships Team Leader at Historic England said: “We are delighted to fund the interpretation of Murdoch House through the Redruth HSHAZ. The late-18th century building is a tangible link with one of Redruth’s most important inhabitants and his legacy. Murdoch House has been used as centre for culture and education since the 1930s and we’re proud to help it to continue to fulfil this role long into the future.”

Cornwall Council portfolio holder for economy Louis Gardner said: “It’s fantastic to see the commitment and enthusiasm of Redruth 2000 to tell the story of this important pioneer and his contribution to the history of Redruth, Cornwall and the world. It is trailblazers and forward thinkers like him who must be lauded and remembered.  This project will contribute to Redruth’s reputation as a place for telling Cornwall’s cultural and economic story so generations to come can appreciate how what has gone before contributes to what is happening now and in the future.”