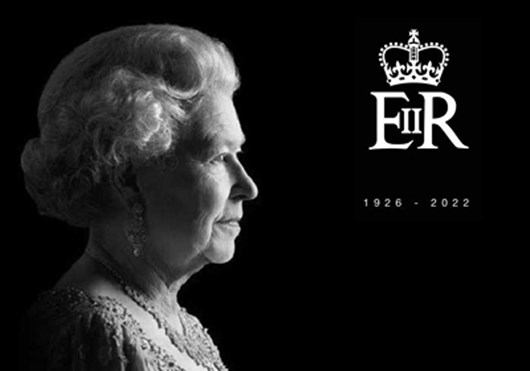 We are deeply saddened to learn of the death of Her Majesty The Queen.

We offer the heartfelt condolences of Cornwall to the Royal Family.

As a mark of respect, the flags at New County Hall will be flown at half-mast.

"It was with great sadness that we have today learned of the death of Her Majesty The Queen. She was truly remarkable, much loved and respected. Throughout her long reign she provided a sense of continuity, stability and leadership during times of enormous social change and will be greatly missed by both the Royal Family and the whole nation.
"Others have paid tribute to her devotion to duty and her life of public service and I would like to join with these tributes. She touched the lives of so many people of all generations and her death marks the end of an era in the life of our country.
"The Queen was much loved by all in Cornwall, many of whom have fond memories of her many visits to the Duchy. I will convey our deepest sympathies and condolences to the Royal Family on their, and the nation’s great loss."

Books of condolence are available to sign at the following locations from Friday, September 9:

Find out more about the books of condolence

Political group leaders from across Cornwall have also added their tributes to Her Majesty The Queen.

“The loss of our Queen, Elizabeth II, is one that is felt in Cornwall, Great Britain, the Commonwealth and around the world.

“Our Queen, although small in stature, was a global colossus by reputation, a bright beacon among heads of state internationally, offering a lifetime of service to her grateful nation.
“Her reign as monarch of our United Kingdom was unprecedented in length and she provided the continuity and stability on which our nation rested and grew, through the decades.
“Our thoughts are with the Royal Family at this sad moment, as we take time over the forthcoming period of national mourning to reflect back on our Queen’s lifetime of service, and her legacy to us all.
“God save the King."

"I was saddened to hear the news yesterday evening. Like for so many people, the Queen had been a constant presence in my life.
"For her, from the moment she took the throne, it was always about service to her people, both in the UK and abroad, and she always put their interests first.
"I do not know of many people who would have been able to carry out her role for so many years with such compassion and dignity, and I just want to say thank you for all she has done for our country.”

“Your Majesty, you have served the people of the United Kingdom and the Commonwealth with dedication, steadfastness, and grace. Thank you for all you have done.  God Save the King.”

“Like most people, the Queen has been there for the whole of my life - a steady constant when everything else changes around us.
"Her whole life was spent in the service of other people. Our interests were her interests.
"We had her with us for what felt like such a long time – 96 years. But of course it wasn’t, and there are people being born today who will never know her. We are lucky to have grown up with her and to have seen first-hand her commitment and duty which is an example to all of us in public service and in the way we live our lives.
"We have suffered a great loss, but we have been privileged to have her for so long.”

“It was very sad to hear of the death of the Queen.
"A much-loved woman, she was respected around the globe. She served as a monarch with great dignity across eight different decades, and her years of service touched the lives of so many, many people.
"The leadership team of Mebyon Kernow – the Party for Cornwall - would like to extend its sincere condolences to the family of Queen Elizabeth II in their time of grief.”

Proclamations – timeline is as follows:

The principal proclamation will take place at St James Palace, London, on Saturday, September 10, at 11am.

Cornwall’s proclamation will take place on Sunday, September 11, at 1pm.

He will be accompanied by Pol Hodge, the Grand Bard of Gorsedh Kernow, who will read the proclamation in Cornish.

If you are deeply affected by the death of The Queen you’re not alone.  Many of us are in mourning for our monarch, who has been a central part of life in Britain for so long.

The Cornwall Bereavement Network brings together bereavement services from across the county. Its aim is to make it easier for those who have experienced the death of a loved one to find support and information. You can find out more by visiting their website.

And nationally the Cruse Bereavement Support helpline is offering extended hours over the period of national mourning. Call them on 0808 808 1677 to talk to someone if the situation has brought up difficult feelings for you or find out more on their website.