Census 2021: Welcomed increase in the number of people identifying as Cornish

There has been a substantial rise in the number of people identifying as Cornish in the Census 2021.

The latest set of results from the Census released this week focus on ethnicity, identity, language and religion.

Across the whole of Cornwall, England and Wales the results show that 99,754 people stated their nationality as either ‘Cornish’, or ‘Cornish and British’. That compares with 65,717 who did so in 2011. The overall figure will be even higher than 100,000 once the Census figures for those who expressed their identity as a combination of Cornish and at least one of English/Welsh/Scottish/Northern Irish identities are revealed. 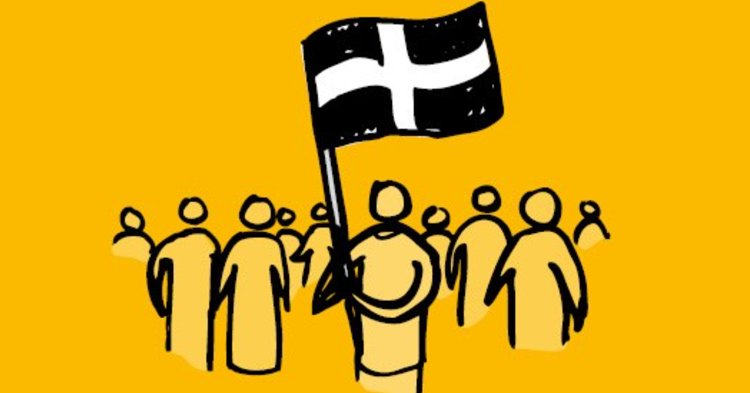 Prior to the 2021 Census, Cornwall Council petitioned for a Cornish ‘tick-box’ to be added as one of the listed options for people to choose when answering the ‘national identity’ question, but the ONS did not support the request.

This refusal was despite the fact that the UK Government recognised the Cornish as a national minority in 2014 under the Framework Convention for the Protection of National Minorites, and the Council of Europe subsequently recommended the Office for National Statistics (ONS) include a Cornish ‘tick-box’ in the 2021 Census to comply with the Convention. People who wished to identify as Cornish were subsequently encouraged by Cornwall Council to tick ‘other’ and either type-in or write-in ‘Cornish’ in their Census return.

Councillor Linda Taylor, Leader of Cornwall Council, said: “It is fantastic to see that nearly 90,000 people living in Cornwall identified as either ‘Cornish’ or ‘Cornish and British’. This strengthens our call for the Government to fulfil their obligations set out in Framework Convention.

"Cornwall Council supported the campaign for a Cornish ‘tick-box’ to be included in the Census 2021, but frustratingly this did not happen despite the success of Golden Tree’s mobile Cornish Embassy gathering widespread backing from the public for a ‘tick-box’. Despite this set-back, the Council promoted the option for people to either type-in or write-in ‘Cornish’, which has resulted in a significant increase in the number of residents choosing to identify themselves as either ‘Cornish’ or ‘Cornish and British’.”

Councillor Dick Cole, Chair of the Cornish National Minority Working Group, said: “It is disappointing that we haven't got the total figure identifying as either Cornish or Cornish plus another identity. However, when that overall figure is finally revealed it will undoubtedly show that in excess of 100,000 people across Cornwall, England and Wales identify as Cornish.

"This is welcomed news, and we will strengthen our resolve to press the ONS to include a Cornish ‘tick-box’ in the next Census, and more immediately, request all Government departments and agencies to include ‘Cornish’ as an identity option on all official forms.”

The ONS Census Deputy Director Jon Wroth-Smith said: “The numbers published this week on the population identifying as Cornish are just the start of the wealth of statistics and analysis to come from Census 2021. In this first stage, we have been able to start to paint the picture of those people who identified as ‘Cornish’ alone, plus those who identified as ‘Cornish and British’ only. The next stage will include the population who identify as Cornish with other the UK identities, English, Welsh and Northern Irish so we will undoubtedly see the size of this population increase.”

The Census is carried out by the ONS every 10 years and gives a picture of all the people and households in Cornwall, England and Wales. Information from the 2021 digital-first Census helps everyone from central government to organisations, such as councils and health authorities, plan and fund public services. Census outputs inform where millions of pounds of public funding is spent on services like transport, education and health – on cycle routes, schools and dental surgeries.
The ONS is due to release more data in the coming weeks and months.

To see more information about the Census and the data that is available go to census.gov.uk.