Cornwall urged to stand up to violence against women and girls

Ending violence against women and girls is everyone’s business.

That’s the message from Safer Cornwall - Cornwall’s community safety partnership - as it urges people to stand up to violence against women and girls (VAWG).

After receiving funding from the Government’s Safer Streets Fund, Safer Cornwall has been working with students from Falmouth University on a campaign encouraging people to speak out when they witness inappropriate behaviour.

A series of posters featuring real-life examples of when people have safely stepped in to protect women and girls have been produced as part of the student-led ‘Not all heroes wear capes’ initiative. 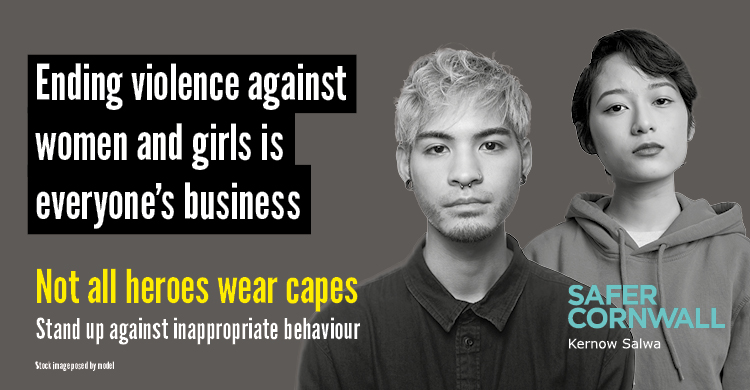 Coinciding with the annual, international campaign 16 Days of Activism against Gender-based Violence, which starts on 25 November and runs until 10 December, the posters are currently on display across Falmouth, Truro and Penzance. They will also appear on some buses and social media.

What to do if you see inappropriate behaviour

Direct: Call out inappropriate behaviour by telling the person to stop or asking the victim if they are okay.

Distract: Start a conversation with the person engaging in the inappropriate behaviour to allow the potential target to move away or have friends intervene.

Delegate: If you feel too uncomfortable speaking out or you don’t feel safe to do so, get someone else, such as a member of staff, to step in.

Delay: If the situation is too dangerous to challenge there and then (such as if there is the threat of physical violence, or you are outnumbered), just walk away.
Wait for the situation to pass then ask the victim later if they are okay. Or report it when it is safe to do so – it’s never too late to act.

Councillor Carol Mould, portfolio holder for Neighbourhoods at Cornwall Council, said: “Young women should not feel threatened or intimidated when they go out at night. The campaign we are working on with the students moves the focus firmly away from victims of sexual harassment, abuse and assault. The burden shouldn’t fall on women to keep themselves safe, especially when going out at night.

“This work has been done by young people for young people and will create a lasting legacy to help increase women and girls' feelings of safety in our public spaces."

More information about tackling violence against women and girls (VAWG), how to intervene safely and active bystander training is available on the Safer Cornwall website.