Passengers save £1.2m on their bus tickets during first three months of lower fares scheme 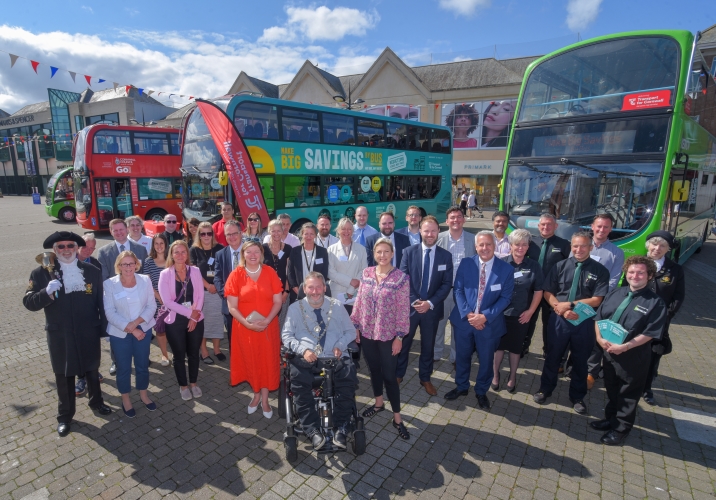 Bus passengers in Cornwall saved around £1.2m during the first three months with more than 625,000 reduced fares tickets sold between April and July.

The reduced fares pilot – introduced on April 10 - has significantly cut the cost of bus travel in Cornwall with fares on average now at least a third cheaper.

New technology introduced over the summer means passengers making contactless payments can ‘tap on and tap off’ - capping their payments so that no matter how many journeys they make, they pay no more than £5 a day or £20 a week for bus travel in Cornwall.

A first for a local authority, the pilot follows the Council’s successful bid for £23.5m in government funding and involves bus companies including Cornwall by Kernow and Go Cornwall Bus working in partnership as Transport for Cornwall.

“Initial feedback from the reduced fares pilot is very encouraging and while passenger numbers are yet to return to pre-Covid levels, we are seeing a return to bus use ahead of the national trend. Residents have previously told us that one of the biggest barriers to traveling by bus was the cost – with fares now significantly cheaper than before, I encourage everyone to jump onboard!

“Cutting the cost of bus travel in Cornwall is another step in encouraging more people to look to more sustainable ways of travel - for example taking the bus for shorter journeys that they may usually make by car.

“Many car journeys are of less than five kilometres, often with just one person in the car – it all adds up, creating congestion and increasing our carbon emissions. In our busier areas we’ve put the infrastructure in place to help keep buses moving on congested roads, giving priority to public transport – meaning passengers spend less time stuck in queues than they would if they were driving.

“Swapping car journeys for walking, cycling or public transport is good for the environment, our health and – given the current cost of living crisis – our wallets too.”

“It’s great news that in Cornwall, bus usage is continuing to climb back to and beyond pre pandemic levels, supported by the Low Fares funding and our powerful partnership between operators and Cornwall Council.”